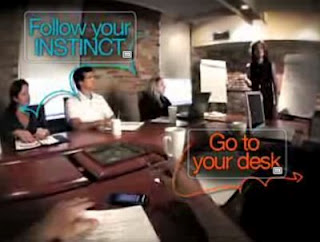 Just when you thought viral marketing — especially viral videos — had grown stale and clichéd, Samsung has raised the bar.

The campaign is called Follow Your Instinct and it launches the Samsung phone of the same name. (The Instinct part.) I gotta say, folks, this is pure genius. It’s such smart strategy, you’ll wish you’d thought of it first!

It’s a series of videos on YouTube where viewers guide the story line by selecting the next steps within the video. The viewer chooses their own hilarious adventures. The footage is shot from our perspective and the transition between the vids is perfectly seamless. The story lines are funny and enticing; there is no way you will click out before finding out what happens next. But, most importantly, as fun as the vids are, they also demonstrate the phone’s functionality and features as we use the Instinct for texts, GPS, email, music, camera, and of course, phone calls.

We’ve all seen game ads before, but this takes it to a whole new level of audience participation. The technology behind it is (apparently) pretty simple. They used YouTube’s interactive annotations, which connects two links to two other videos on YouTube. This kind of viewer interaction actually reminds of me of plinking which I still hope will become a major revolution for consumer interaction video marketing.

Bottom line, I can’t wait to see the numbers climb on this thing. Way to go Samsung! Your creativity is inspiring! (And, great strategy from YouTube, as well; I’m sure folks will be figuring out how they can use the annotations tool for themselves. I know I’m passing this on to our creative teams right now!)