I really believe that we are witnessing our nation’s first Social Media election. The impact of peer-to-peer media has changed every aspect of how these candidates market themselves. Even my mother recently pointed out that this is the first time the candidates are really getting called on inconsistencies because we can instantly compare current and past statements on YouTube.

I’ve been watching the debates at a great pub in Atlanta called Manuel’s Tavern. It’s a blast because the place is packed – wall to wall. (We had to get there over two hours early just to get the last available table Tuesday night and my friends and I stood for the entire VP debate.) But, as crowded as it is, the moment the debate starts, everyone is quiet, eyes glued to the TVs. Except for the occasional cheer or jeer, you’d never know you were in a pub.

What really fascinated me was the number of folks who sat with their laptops ready as they blogged a live blow-by-blow of the action. Others furiously tweeted on their berries and iPhones as they kept their Twitter feeds running. On hand in the pub were v-loggers like Amani Channel of My Urban Report with his cameraman in tow getting crowd reactions alongside CNN and the local news stations.

Back in February, I talked about the new media impact on the primaries and referenced the momentum created by sites like Declare Yourself; Facebook apps like the ABC-sponsored RSS video feed; MySpace Impact a site that has drawn a half a million young voters who debate the issues and discuss the candidates in board and video form. Of course, ThinkMTV has played a major role in registering voters and bringing issues front and center and The Rebelution has also been uniting the Christian vote and serving as a grassroots format for that constituency.

As we’ve seen, even the candidates themselves are embracing social media in various ways, sometimes cleverly – sometimes not so much.

And, then there are the videos on YouTube where every nuance of each candidate’s move is analyzed, discussed and parodied. This debate has created super stars online with new voices lending commentary and others creating parody vids. (And, if you want the mother of all time-wasters, try the official Twitter Election Feed. I have lost entire weekends on there.)

What is most amazing to me is that brands are joining in the frenzy. Vegas.com, which calls itself “The official Vegas travel site,” has launched Crapshoot ’08 with the tag, “Because you need to be drunk to make it through this election.” And, Burger King unveiled “Have it your way” supporting consumers’ “Right to vote,” be it at the poll or when ordering customized food orders at a BK drive-through. 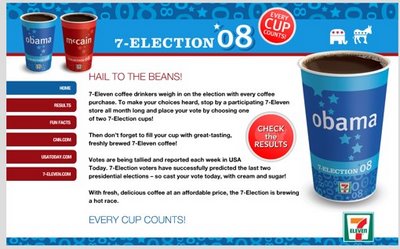 7-Eleven is allowing consumers to “vote” by choosing an Obama or McCain branded coffee cup in the mornings. They are even keeping a running tally by region for those who want to see what the average Joe is choosing via his cup of Joe.

This is fast-becoming the first brand-sponsored Presidential election. And, once again, social media is proving to be the most powerful force in marketing today. So, when your clients say they aren’t sure if they should engage in an SM campaign, I’d direct them to the online frenzy we are seeing right now as proof that there is a whole new world out there and they can join it or get left behind in the dust.