When I was a little girl, Friday night in the Jones household was Game Night. Both of my parents were entrepreneurs. They put in crazy long hours building their own successful businesses, all the while raising four children who were only a year apart. Honestly, I don’t know how they did it. But, they made sure that until we were old enough to be distracted by dates and babysitting and jobs, on Friday nights we gathered around the game table playing board games. Parcheesi. Backgammon. Clue. And, of course, Monopoly.

Well, today, Hasbro and Google launched what they’ve called “the biggest game of Monopoly the world has ever seen.”

Monopoly City Streets allows players to compete worldwide in real time. Google Maps lets users “buy” any street anywhere in the world. When players create an online profile, they get $3 million to “purchase, build and trade in neighborhoods all over the world.” Every time they log in, they receive another $1 million, plus the rents they are owed from properties they own. 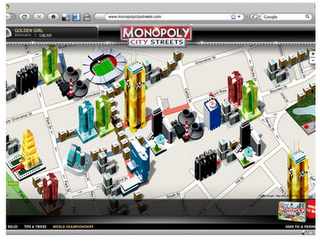 Playing into modern times, the game lets people choose the look of their properties and allows others to sabatoge players by building sewage plants, prisons and other property value killers. On the flip side, players can increase their own property values by investing in windmills, skyscrapers, schools, etc. The MPG will be online for four months to promote Hasbro’s 3-D Monopoly game which hits shelves this fall.

This is a brilliant idea. A great way to hip an old game. A great way to promote the 3-D game’s release and a great way for Google and Monopoly to get direct-to-consumer interaction. Frankly, I couldn’t wait to get in there and try it myself. Unfortunately, neither could a whole lot of other people.

The site went live this morning but has been crashing all day due to traffic. “We did anticipate an opening rush but it has absolutely surpassed our expectations,” said Pat Riso Hasbro spokeswoman.

They had hoped to get the site running smoothly by noon, but I’m writing this at 10:30 pm and it’s still stalling out.

Meanwhile, the game’s official blog has hundreds of comments from irate players complaining that all the decent real estate has been snatched up by the lucky few who got through to the game’s servers. The blog has added a poll asking whether the game should be reset once the new hardware is in place. Although an overwhelming majority are voting yes, a Hasbro spokeswoman said they are not planning to reset the game.

My advice to Hasbro and Google is to resolve the server debacle and hit the reset button. Otherwise, you will receive a flurry of unnecessary criticism from players and consumers. Even those who haven’t tried to get online and play will be outraged simply because – let’s face it – outrage is in. Especially online. Online, outrage is funny. Outrage leads to mockery and the world of Web 2.0 never misses a chance for some good ol’ corporate mockery. By resetting the game, Google and Monopoly earn some goodwill instead. Sure, those who grabbed Wall Street and Hyde Park and Notting Hill and Altamount Road will be upset. But, I don’t think they have the heavier hand here.

From a wider perspective, more brands should take note of the general idea. It’s no longer enough to build a little application or fan page or micro-site. If you want to connect with your customers, you need to build a community – a place where they will visit again and again. Where they will see your logo, engage with your products. This isn’t an idea just for a game company. Every product can be incorporated into something fun and community-driven. 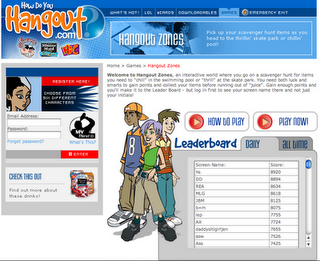 When I was with Macquarium Intelligent Communications many years ago, we built an online game for Minute Maid and Hi-C that included a trivia game built into a Flash animated board game. It was highly successful in personally connecting those brands with tweens online.

We created it long before web 2.0 so the community features were limited to message boards, ecards, high score leader boards and downloads. So, just imagine what can be done with all of today’s social tools.

In the meantime, if I ever get to play Monopoly City Streets, I will let you know what I think of it…as long as I get to be the race car.