They say a certain road is paved with good intentions. Well, ladies and gents, I have found that road and it lies in Denmark. 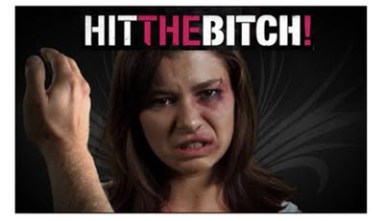 On the site, you can use your mouse to move a big hand that repeatedly beats the tar out of an attractive young woman. Each strike is met with eerily accurate sound effects of the hit and her painful cries as she recoils from the blow and horrible bruises appear on her face.

I am not making this up.

In the end, when you’ve appropriately beaten the woman to the point of her falling down, the phrase “100% IDIOT” appears on the screen. The woman is then shown sobbing and writhing in pain on the floor. The site then plays what I can only hope is an anti-domestic violence message (it’s in Danish).

I really have to wonder who came up with this idea? I’m quite sure they had good intentions and I’m equally certain the creators of this site believe the disturbing nature of this “game” is a good thing. After all, it is good that I am disgusted and offended by “participating” in domestic violence. But, what’s the point in “preaching to the choir?” I don’t need to experience hitting an innocent girl to know it’s wrong and I don’t think many other people do either. So, the “game” doesn’t motivate me to any action I wasn’t already on board with.

If they’re after men who DO beat up women, seems to me they’ve just created a site that those animals will enjoy. So, I don’t get it.

UPDATE: I did a little more digging, and it seems this is the organization behind the PSA.