Well – it’s graduation time, y’all. My eldest niece is graduating from high school this month and headed to SCAD where she will knock ’em dead with her talent and charm. 🙂 With this in mind, I wanted to reprint a post from last year I wrote for all those graduates who are preparing to walk across those stages accepting their hard-earned diplomas and degrees. So, ladies and gents, here is my Message to Graduates about the value of Fear.

Congratulations! You are now officially a part of the “real world.” How does it feel? A little scary, I imagine. Well, that’s okay…in fact, it’s my hope that you’ll learn to relish those scary moments. I’ve had a helluva career and it’s largely due to scary times.

I worked as a PR strategist during the mid nineties when anyone with an idea starting with “e” or ending in “.com” could easily obtain several million dollars for publicity. Man – those were some wild days! I’ve messaged and media trained some of the most successful business leaders of our time. I’ve launched new companies and new ventures and secured media coverage for my clients ranging from a six minute piece on CNN to a spread in Time Magazine. 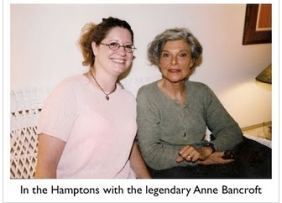 I’ve also had the incredible experience of working as a screenwriter and film producer, spending time with some of the actors, actresses, and television network creators and movie producers I’ve long admired. And, now, as a consultant, I guide, strategize, train and promote some of the coolest companies and entertainers around. (Ed note: no longer consulting, now I’m with Porter Novelli).

I’ve been able to do all of this for several reasons – the greatest of which was fear.

You see, I’ve had the advantage of working with a variety of mentors in my career. There was Kellie Mullen who taught me how to see PR through the big-picture lens. There was Trish Nicolas – who to this day – is the embodiment of professionalism to which I aspire. There was/is Marc Adler whose courage in business knows no bounds. And, Patrick Cowan whose innate talent for diplomacy guides me every day. 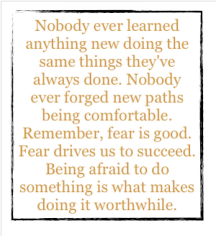 But, it all really came together with the words from Tosha Whitten-Griggs. Tosha and I worked at Alexander Ogilvy together. In 1999, I had the opportunity to leave AOPR and join Marc Adler in launching a new dot com venture he was putting together. My role at AOPR – and the sum of my relevant experience at that time – was strategic planning, creative concepting, messaging, media training, new business pitching, media writing and speechwriting. Although I had developed publicity strategies, I’d never had a single conversation with a reporter nor had I ever run a campaign on my own. And, here was a very impressive and successful entrepreneur asking me to do just that.

I remember sitting on the rooftop of the Colony Square building in midtown Atlanta with Tosha having a cigarette – back when I used to smoke. I was both excited about the opportunity and really scared too. I’d been at AOPR for a few years and had helped my boss, Kellie, build a solid and successful strategy and brand messaging team. I knew the job backward and forward and could do it in my sleep. In short, I was quite comfortable.

So, the idea of taking on an entirely new challenge where the success of the campaign was solely on my shoulders and the prospect of engaging in aspects of the job I’d never even tried was terrifying. As I discussed it with Tosha, I think I was seeking her approval to stay where I was. Then, Tosha said, “if it makes you a little scared to do it, it’s worth doing.”

I’m sure to Tosha that was just any old conversation. No big deal. Just hanging out with me chatting. In fact, as I recall, the subject was quickly changed and nothing more was said. But, to me – that was a career-making sentiment. I left AOPR and enjoyed an incredible seven year run working with Adler who in his own right has made a huge impact on my life.

Since that moment, every time I am faced with a new challenge – every time I get a little bit scared because the job is really big or the task is new. Every time I think I just might be in over my head – I remember Tosha’s words. And, that’s what I want y’all to do.

You’re going to face a lot of new challenges – the first of which will be finding gainful employment in this economy. But, relish the fear. Let it force you to give it all you’ve got – to stand out – to make your mark. When you do land a job – never let it grow stale. Find new ways to improve the processes or challenge the status quo. The moment you get comfortable, find a way to shake things up. Nobody ever learned anything new doing the same things they’ve always done. Nobody ever forged new paths being comfortable.

Remember, y’all – fear is good. Fear drives us to succeed. Being afraid to do something is what makes doing it worthwhile.

So, good luck! Have fun! Break the rules and make up new ones! And, if you can – seek out people who will challenge you, drive you and teach you a little along the way.