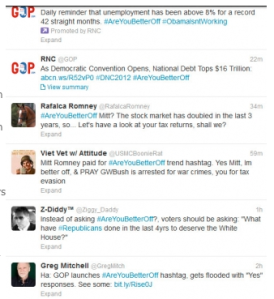 There is always a big risk when you hang your promotional hat on a paid-for hashtag.

McDonald’s learned that lesson earlier this year when they asked Tweeps to share their stories to #McDStories. Negative tweets about the fast food chain took over the interwebs ranging from comments about being high while eating McDonald’s to throwing up the food, prompting the New York Observer to remark that “some stories are better left untold.”

Wendy’s fell into the same trap last year, paying for the exclusive use of #HeresTheBeef. I will just let you imagine what Tweets that hashtag prompted.

Well, it seems The Campaign to elect Governor Romney didn’t get the memo. After paying $120,000 PER DAY for the use of #AreYouBetterOff, the GOP was clearly expecting a resounding “no” from Twitterers to support their campaign message that President Obama has not improved the economy.

Instead, #areyoubetteroff was combined with the word “yes” more than 1,800 times in its first 24 hours, while it was only paired with “no” around 600 times during the same time period.

And, since then, the yes/no ratio has been an embarrassing 5 to 1.

To make matters worse for the Romney campaign, their original hashtag has already spawned rebuttal hashtags like #iambetteroff and#betteroff which, as you can imagine, are full of examples of how Americans say they are better off and how they imagine they’d be worse off under a Romney/Ryan presidency.

It’s important to remember social media is not a controlled environment. It’s the wild west and open-ended questions can really bring trouble. It’s best to think like a trial attorney when creating your hashtag strategy and never ask a question unless you absolutely know what everyone’s answer will actually be.