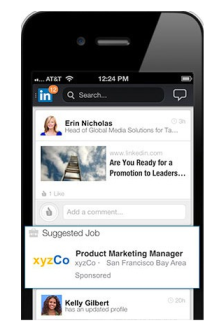 LinkedIn announced today  “sponsored jobs” will now appear as part of a user’s Feed on both desktop and mobile.

Previously, sponsored jobs only appeared in the “Jobs You May Be Interested In” section of the site along the right rail. This now means that job ads will now appear with other content in the feed just like news and updates.

“Across all platforms, Sponsored Jobs surface meaningful, personalized recommendations for our members and connect them with opportunities that they might not have found on their own,” Sachit Kamat, a senior product manager for LinkedIn Jobs, wrote in a blog post. “In bringing them to the feed, we’ve taken special effort to maintain a great member experience, and will continue to track this over time.”

LinkedIn unveiled sponsored job postings last year, and uses profile information to match job openings with potential candidates. Employers are then charged a fee when candidates click on their sponsored posting. LinkedIn believes that bringing Sponsored Jobs to mobile will greatly enhance their visibility, pointing out that 30% of users who view job postings on the platform do so from a mobile device. LinkedIn also claims that sponsored job postings on mobile are four times more engaging than their desktop counterparts, wrote Kamat.

Of course, Twitter rolled out promoted tweets to user feeds in 2010, and Facebook sells advertisements for the News Feed on both desktop and mobile and neither network suffered in user activity, despite some consumer protests. And, we know these sponsored Tweets and Posts see a 1-3% engagement rate, depending on the source of the stat.

What do you think of Jobs ads appearing in your news feed?