Like so many of you, I have been stunned by the images of a militarized police force in Ferguson, MO harassing, tear gassing, arresting and even beating citizens who are protesting the police shooting of 18 year old Michael Brown.

For reference, here is a quick timeline of the events:

Had the Ferguson Police left it at that and allowed the protesters to have their say, exercising their right to free assembly, allowing them to mourn and grieve and come together, the violence in the streets would have likely ended. 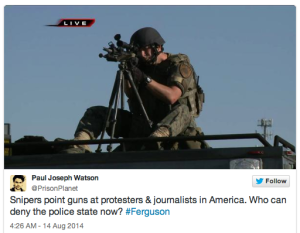 But, instead, on Monday, the police came out in full-force on the streets wearing camouflage (either to hide in the jungles of St. Louis or to intimidate citizens, you decide.)

They rode in on military tanks.

They positioned themselves on top of tanks with snipers aiming their weapons at unarmed citizens and lawful crowds.

They fired tear gas into peaceful crowds and shot innocent civilians and reporters with wooden and rubber bullets. They arrested people without cause – and in some cases without even charges being made.

They physically assaulted reporters and citizens.

They tore down news organization’s set ups, pushing lights to the ground and covering/dismantling cameras. They destroyed civilian’s cameras and phones and recording devices.

Now, you may be wondering why a PR/SM blog is talking about this situation. The simple fact is, purely from a PR perspective, the Ferguson police are making things so very much worse.

The city is angry about police brutality and unchecked violence from cops.

So, the last thing you want to do is give everyone images of police brutality and unchecked violence from cops!

Let me be clear – these police actions are absolutely wrong from a human perspective too. And, from what I have seen, they have trampled on the people’s right to assemble, freedom of the press, free speech, destruction of personal property, unlawful arrests and likely dozens of other rights I’m not even familiar with.

But, strictly from a PR perspective, they are cutting of their own noses to spite there faces.

I understand after the previous night’s looting, the police would want to establish order. But, the way to achieve that is to allow the people to march, to protest, to be heard.

Showing up in full-on military gear.

Arresting an Alderman who was simply sitting in his own car Tweeting about the events.

Assaulting and falsely arresting two reporters who were sitting in a McDonald’s writing their news stories.

This is not the way to change the people’s perception of the force.

It is worth noting that the Mayor, who has been defending this police state action, and the Ferguson police chief also took five days to meet with the victim’s family. Another epic PR fail.

Instead, the Mayor and Police Chief’s absence has been met with criticism and has been used as evidence of their uncaring attitude. A simple visit. A heartfelt speech. A photo opp. All of these things could have created a very different impression.

The word today is that the Ferguson Police are being relieved of their duties as the Missouri Highway Patrol is being put in charge.

My heart goes out to the Brown family and all the victims of this horrible tragedy and police brutality.

Here’s hoping the MO leadership will begin to recognize that if you want to change the headline, you have to actually do something that changes the headline.

Here’s hoping the highway patrol will resort to compassion over militarized action and will work to help this community heal instead of causing more pain… and PR headaches.

Let me know your thoughts below!