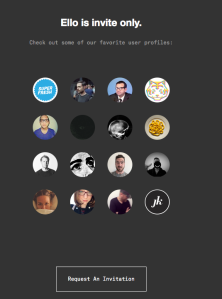 As you know, the privacy-driven social networking site, Ello, began a BETA-launch media blitz last week that has secured them media coverage in nearly every possible outlet and made them a trending topic on Twitter overnight.

The site is still in invitation-only BETA, which is a brilliant marketing move because the invites are becoming more desirable as people brag online that they are “in.”

In fact, by last Thursday afternoon Ello was number five in Google’s hottest searches and people on Facebook and Twitter were begging to join. There are even reports that one person had already forked over $500 on eBay for an invite. And, others are offering to sell invites for as little as a few cents to thousands of dollars.

I encourage you to simply get an existing user to invite you – every user gets 25 invitations.

The approach is really just like the Gmail beta invite ten years ago. Or 2011’s early rush to join Google+, which, of course was the only time anyone had any desire to sign up to G+.

Still, Ello’s founders say they are receiving 50,000 requests for invites every hour.

SO, WHAT IS ELLO?

They describe themselves as: “An independent, invitation-only ad-free social network.”

And, as anyone who has spent any time at all on Facebook can assure you, the ad-free part of this site is absolutely compelling.

But, let’s look at their company manifesto:

Ello is successfully positioning the site as the anti-Facebook, especially when it comes to data-ming and user data collection. In fact, if you click that you “do not agree” with their manifesto, the site automatically redirects you to Facebook.

When asked how they compare to FB, coFounder Paul Budnitz said:

“The advertisers [on Facebook] are the customer and the user is the product that’s being bought and sold. We don’t see ourselves competing with them, because what we’re doing feels so different.”

This all sounds great and makes for interesting interviews and soundbites, but the question remains:

DOES ELLO REALLY NOT COLLECT DATA ON USERS?

For a company positioning itself entirely on privacy, the answer is surprisingly muddy.

You see, Ello does, in fact, track site behaviors. They say they do this anonymously, but they still use Google Analytics, which is famously invasive of privacy. Now, they say they use an “anonymized” version of Google Analytics. But, if you read the fine print, user IP addresses are only anonymized before storage, but after they are delivered to Google. And, I’m not sure how much I trust Google with that information before it is anonymized.

The information Ello collects includes your location, language, referring web site, and time spent visiting Ello. This information is anonymous and aggregated. Before information about you is stored on the Google servers, your IP address is stripped and anonymized. This means that it is very difficult for anyone (including Ello and Google) to trace the data that Google stores back to any one user. We can see how people are using Ello in general, but not what you are doing in particular.

I asked my friend and data analytics expert, Elliott Augustine about this and he said:

“Making it difficult to trace the data is not the same thing as making the data untraceable.”

An important distinction to be sure.

“Ello does not have any affiliated companies right now. But if we do in the future, we may share information with them, too.”

Good to know. In other words, they are luring people in with the promise of no tracking or data collection and that they won’t sell or share your information with anyone, but who knows what the future may hold.

Now, they do offer their users the option to opt-out of the anonymized version of tracking. So, that is promising.

But, still the onus is on the user of this privacy-focused site to engage true privacy features.

Then, there is the whole user base and how it handles privacy. Some have pointed out that Ello is currently less safe than Facebook or Twitter, because it has yet to implement key privacy and abuse measures. Right now, all users can see everything within the network; there’s no ability to make an account private, set differing levels of privacy for different posts or users, block individual users or flag inappropriate content.

“Ello is a platform built for posting and sharing public content. You should assume that anything you post on Ello other than private messages will be accessed by others. Search engines will be able to see the content you post. Content you post may be copied, shared, or re-posted on Ello and on other parts of the internet in ways that you and we cannot control.”

Now, all of this doesn’t necessarily spell trouble for Ello. They are still seeing massive media interest and the clamor for a social networking site that doesn’t collect and sell information is refreshing and clearly something the public wants.

We’ve seen mixed reviews on the site’s design and interface, with some people hating it and some people really hating it, while others are willing to give the benefit of the doubt based on the fact that the site is still in BETA and is a “work in progress.”

It will be interesting to see how Ello is embraced by users in the long run.

But, one thing is for sure – they have proven that the general public is fed up with data-mining and is ready for web sites that don’t treat the user like a product to be sold to marketers.

As a privacy-loving-internet-using-web-addict myself, that’s a trend I love to see.

Oh! And, you can find me on Ello @jenjm