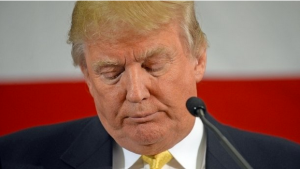 Unless you are living under a rock, you saw the stunning and often bizarre and rambling announcement from Donald Trump that he is running for President of the United States.

In his announcement, Trump expressed his usual brand of arrogance. But, then he took things a step farther when he made outrageous claims about Mexicans, calling them “rapists and drug dealers.” (Full video below.)

Immediately following his announcement – during which, he apparently paid several people to cheer and applaud him – the spanish-language network Univision announced they would not air The Donald’s Miss Universe pageant, which Mr. Trump owns.

Donald doubled down on his offensive remarks and erupted into yet another Twitter feud with Univision’s corporate leaders. Naturally, this made many people question Mr. Trump’s maturity level, especially when seeking the highest office in the land.

The interwebs have since been flooded with petitions and calls to action from people from both sides of the political aisle demanding that NBC Universal cancel all of The Donald’s television shows, including the Miss USA and Miss Universe Pageants. A Twitter page was launched right after his initial announcement @DumpDtrump, securing thousands of followers. And, Change.org secured more than 200,000 signatures on a petition asking the network to stop airing his shows.

Today, NBCU made the announcement they are ending their relationship with the outspoken personality. The Donald, himself, pulled his show, Celebrity Apprentice, from NBC. It seems Mark Burnett’s United Artists’ Media owns the competition show and there is no word yet as to where the show may land next.

The official statement from NBC Universal:

At NBC, respect and dignity for all people are cornerstones of our values.Due to the recent derogatory statements by Donald Trump regarding immigrants, NBC is ending its business relationship with Mr. Trump.

To that end, the annual Miss USA and Miss Universe Pageants, which are part of a joint venture between NBC and Trump, will no longer air on NBC .

In addition, as Mr. Trump has already indicated, he will not be participating in “The Celebrity Apprentice” on NBC.

“Celebrity Apprentice” is licensed from Mark Burnett’s United Artists Media Group and that relationship will continue.

Once again, the power of social media to unite people behind a cause has brought about change.