Sometimes the worst thing that can happen to your brand, can also be the best thing.

Outfront Media, a company responsible for reviewing the advertising for the Metropolitan Transportation Authority (MTA) just did the Thinx brand a big favor. Although Outfront has found themselves in hot water by refusing approval for period-proof underwear ads because they consider them to be “inappropriate” – they’ve created massive free publicity and advertising for the new brand and united women in the cause.

Thinx, a company that aims to “eliminate shame” surrounding periods, proposed an ad campaign to promote its “underwear for women with periods.” According to Thinx’s CEO and co-founder, Miki Agrawal, the ads have not been approved for placement for various reasons including the amount of skin visible in the ads.

Here are the ads in question: 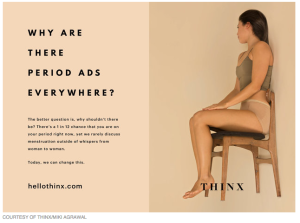 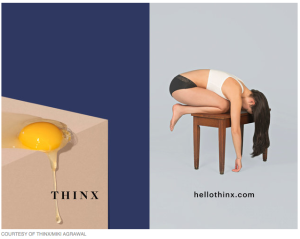 According to an email exchange, obtained by The Huffington Post, a representative from Outfront Media explained to Agrawal that the ads seemed to have “a bit too much skin” and seemed “inappropriate.” Agrawal also claims that an Outfront representative was worried about children seeing the ad.

Anyone who has ever been on a New York subway has surely done a spit-take at this point. I mean, seriously! There is a sudden concern about racy ads on the subway?! When did this happen?

Agrawal pointed out that existing ads on the subway show a great deal more skin and depict women in sexualized positions, including an add for … wait for it … breast augmentation. All of which were approved by Outfront Media.

Let’s take a look at some of the ads Outfront Media says don’t “show too much skin” are are “appropriate” for children.

Veronica del Rosario, Thinx’s director of marketing, said she specifically pointed this hypocrisy out to an Outfront representative.

“I stated [to an Outfront rep] that it was extremely disheartening that [certain other ads] could fly, but something for women that speaks directly to women isn’t OK by them.”

‘This is not a women’s issue. Don’t try to make it a women’s rights thing.'”

I have to disagree. This is very much a women’s issue. Thinx’s ads address an issue every woman on the planet faces – even (shocker) those bikini-clad women. And, for Outfront to allow sexualized images of women on subway ads, but to deny non-sexual images of women about a women’s issue is blatantly sexist and discriminatory.

Now, I get it. Outfront Media thinks periods are gross and icky and should be hidden away.

The irony is: that is the entire point of the Thinx campaign! These ads strive to bring periods “out of the closet” so to speak and remove the stigma that Outfront’s response represents.

I congratulate Thinx on fighting back and I fully support the free advertising Outfront’s caveman response is now giving the brand as media all over the world are now covering the story.

What do you think? Are Thinx’s ads too racy and inappropriate for children?