Just a few days ago, I took a new client through media training. We covered everything from how to use “bridges” to stay on message; how speaking in lists lets you own the time; how to ensure you look good and sound good on the inevitable video interviews that are happening now as everyone shelters in place.

Well, there is one thing I didn’t include in my media training, which I believe I will now add: wear pants!

It seems Will Reeve, an ABC reporter, who did a piece for Good Morning America on Tuesday about pharmacies using drones to deliver prescriptions to people in a Florida retirement village.

At the start of his chat with host Amy Robach, Reeve’s camera had a pretty good shot and the graphics at the bottom of the screen covered up a lot.

But as his segment was wrapping up, it was just a wide shot of Reeve onscreen — with a smaller graphics banner — suddenly it became apparent that he was wearing only the top half of his suit.

Of course, viewers began to call out his mistake in social media. 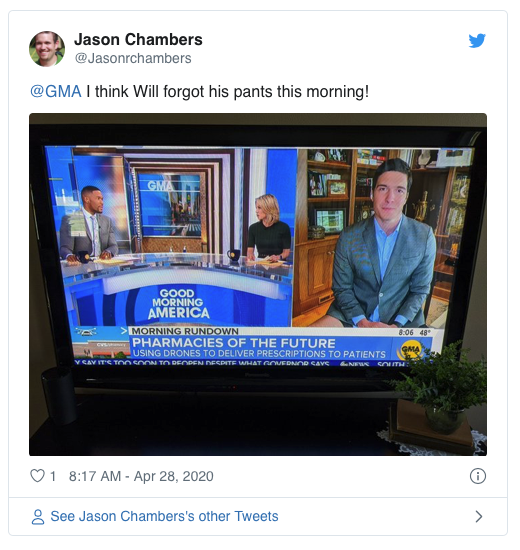 This prompted Reeve to post a reply in which he hoped everyone got a much needed laugh as a result. 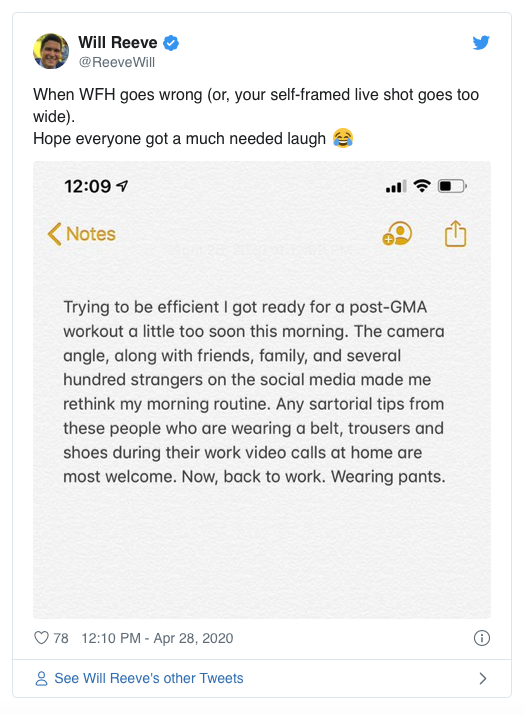 While this is hilarious and definitely understandable in this time of quarantine, I now feel compelled to remind everyone – when you’re on camera with reporters whether you are using Skype, Zoom, Cisco WebX or FaceTime, put on some pants!

Thanks for the laugh, Will.