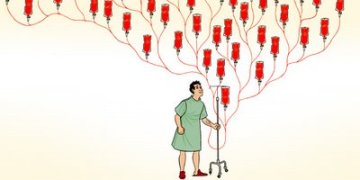 We’ve spent a lot of time here talking about how social media is really nothing more than like-minded people coming together online. Well, further proof of that can be found in a new CBS-BusinessWeek collaboration on the impact of social media on the medical world.

BusinessWeek asked: Medicine has always been a top-down affair. Doctors, drug companies, regulators, and researchers are the expert gate-keepers, telling patients what they need to know. Even their own medical records are locked away to protect their privacy. So what would happen if critically ill patients joined together, obtained their personal information, and made it public?

Members openly share their medical histories with each other in great detail with photos and their real names. Buyers (pharmaceutical companies, doctors, hospitals, insurance companies, etc.) then purchase anomynmous aggregates of the information mined from the site.

Patients get to console, share and cheer each other on while (hopefully) helping bring the medicial community closer to cures. PatientsLikeMe calls it “patients-as-partners.”

They believe “a proliferation of similar startups are building a new business predicated on the belief that the wisdom of crowds of patients will bring insights, solace, and most of all, power.”

CBS &amp; BusinessWeek describe the potential results of that power: Power because, as it turns out, patients talking among themselves on a global scale with complete transparency produces all kinds of unexpected results. Drug side effects can be reported to regulators by the patients experiencing them, without waiting for the manufacturers to come forward. Pharmaceutical companies can use social networks to recruit subjects quickly for clinical trials, speeding up the pace of research. For that matter, patients can simply band together and run their own clinical trials, leaving drug companies and physicians out of the loop.

It’s a fascinating business model and one that will surely see success. A January 2008 survey by market researcher iCrossing found that 59% of U.S. adults search the Internet for health information. The study also showed that 34% of the searchers visited emerging social media such as patient blogs, message boards, and forums. And, I can tell you, from my own experience, just two days ago, my mother and I were discussing potential causes for some pain my father is having and the first thing mom said was, “go online and see what you can find out.” I was already Googling.

The only hurdle they face is the privacy issue. But, as long as the company stays on message that all info is protected and only anonymous profiles are sold, I say it could truly change medical research. The idea that clinical collaboration can be conducted via social media opens the field in terms of size, scope and cross-referencing research and analysis. The medical community just got the world’s largest research bank of symptoms, drug reactions, progression, regression, you name it and patients get community.

I also love that this kind of site will potentially elevate social media from a mere marketing/PR tool to something much more significant in the grand scheme.

Some content pulled from the reporting of CATHERINE ARNST