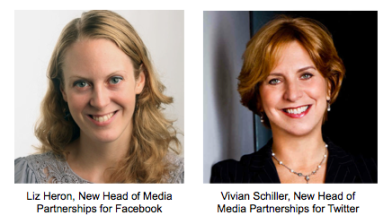 It was announced this week that Facebook hired veteran journalist, Liz Heron of The Wall Street Journal to help better connect the network with media organizations.

This is fresh on the heels of Twitter hiring NBC’s Vivian Schiller to head up their news partnerships.

In a perfect commentary on her new role, Heron announced this job change on Facebook and Twitter before a press release hit the wires.

“In this new role, I’ll have the opportunity to work directly on how Facebook partners with journalists and media organizations, at a time when Facebook is putting a big emphasis on news and mobile, two things close to my professional heart,” she wrote on Facebook.

Both of these new hires support what has already become clear:  news organizations rely on social networks to get the word out about their content and stories.

We all remember during the 2008 U.S. presidential election when Katie Couric asked Sarah Palin what newspapers she reads and she had trouble naming one. Read into that what you will, but the fact is the majority of Americans no longer read any one newspaper or magazine. In fact, very few get their news from just one source; and most “simply read what is put in front of them” through their social networks.

When I first started out in PR in the ’90s, I’d wake up at 6:00 every morning to collect five or six different newspapers from my doorstep. I’d sit with my coffee reading each one, circling news that might be relevant to my clients and colleagues. Today, I drink my coffee in bed, scrolling through Facebook, Twitter and LinkedIn for news stories. And, I’m not the only one.

In fact, data from the Pew Research Center found that 50% of Americans now consider the Internet their main source of news, and nearly 20% of the total population used social networks for news back in 2012. That number has most surely risen since then.

Why does this matter?

When brands eschew social networks and rely solely on traditional PR activities to get their message out, they are ignoring the behaviors of their audience and the opportunity to connect with them. And, with these new hires placing an even greater emphasis on media partnerships, the lines between traditional and social media will likely blur to extinction.

Yesterday, I spoke with the daughter of a friend’s friend who wants to get into PR when she finishes college this Spring. She mentioned social media in an offhand way and said her teacher told her that SM and PR and starting to blend together more. I’d posit that PR/SM have  already become one and the same today. The blend is complete. You cannot have one without the other and clearly Facebook and Twitter realize this.

It will be interesting to see what comes of these new positions and how “traditional” news will continue to fill our social newsfeeds.