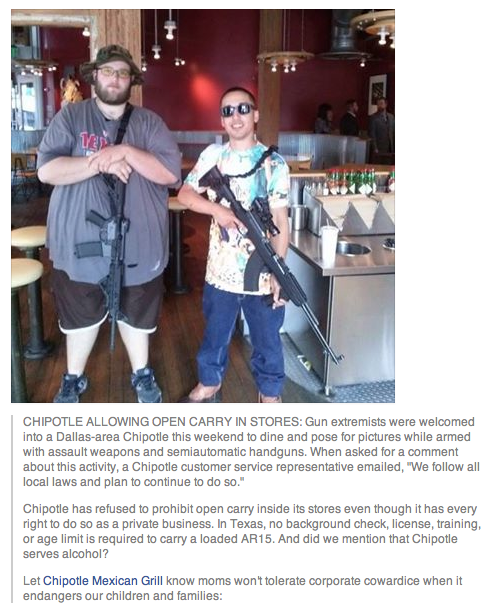 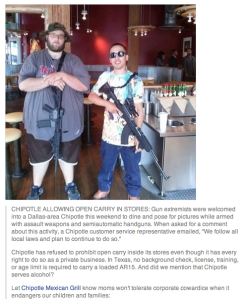 A few hours ago, a photo depicting two heavily armed men standing in a Dallas Chipotle began circulating the web.

The accompanying copy encouraged customers to share the image with the hashtag #BurritosNotBullets and to let Chipotle know they should prohibit “open carry” activity inside their stores. The copy also reminds people that Chipotle serves alcohol.

The topic has become a hot one, especially in Texas where just weeks ago, terrified employees in a Dallas Jack-In-the-Box locked themselves in a freezer when heavily armed men from the group Open Carry Texas staged a demonstration of their right to bear arms by walking into the restaurant with automatic rifles and semi-automatic weapons. The stunt prompted questions about open carry laws in Texas and with national/global chains.

Today, as the #BurritosNotBullets hashtag and photo began to gain traction and the ensuing petitions and promises of boycotts began, Chipotle’s communciations director, Chris Arnold made this statement:

The issue of gun ownership or gun rights has become one of the most contentious debates in the country. Chipotle has never taken a position on this issue, as we focus instead on our mission to change the way people think about and eat fast food.

Recently participants from an “open carry” demonstration in Texas brought guns (including military-style assault rifles) into one of our restaurants, causing many of our customers anxiety and discomfort.  Because of this, we are respectfully asking that customers not bring guns into our restaurants, unless they are authorized law enforcement personnel.

Historically, we felt it enough to simply comply with local laws regarding the open or concealed carrying of firearms, because we believe that it is not fair to put our team members in the uncomfortable position of asking that customers refrain from bringing guns into our restaurants.  However, because the display of firearms in our restaurants has now created an environment that is potentially intimidating or uncomfortable for many of our customers, we think it is time to make this request.

We acknowledge that there are strong arguments on both sides of this issue. We have seen those differing positions expressed in the wake of this event in Texas, where pro-gun customers have contacted us to applaud our support of the Second Amendment, and anti-gun customers have expressed concern over the visible display of military-style assault rifles in restaurants where families are eating. The vast majority of gun owners are responsible citizens and we appreciate them honoring this request. And we hope that our customers who oppose the carrying of guns in public agree with us that it is the role of elected officials and the legislative process to set policy in this area, not the role of businesses like Chipotle. We always welcome the exchange of ideas and opinions: it is one of the many things that make our country such a special place. But this issue is not central to the operation of our business, and we do not feel that our restaurants should be used as a platform for either side of the debate.

Certainly hashtag activism is fast-becoming the most effective way to bring about change And, brands like Chipotle are smart to listen.

This decision not only stopped the steamrolling of tweets and shares and memes and more, but most importantly, it is consistent with their brand.

Chipotle is known as a company that cares about its customers and community with locally sourced foods. Allowing armed men to intimidate their customers – even if the men mean no harm – is not a community value.